About the Surrey Lacrosse Association 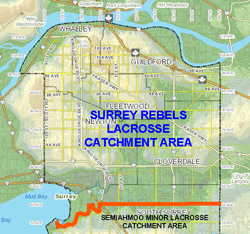 The Surrey Minor Lacrosse Association (SMLA) was established in 1973 in what was then The Corporation of the District of Surrey, British Columbia, Canada to provide minor box lacrosse to the community. The population of Surrey was approximately 100,000 at that time and the fledgling association had only a handful of teams, nicknamed the "Rebels". By 2004, the population of what was now the City of Surrey passed 400,000 and the SMLA had over 400 registered players on 23 teams. In 2007, with the addition of senior divisions to the fold, the Constitution and Bylaws were amended for the first time and the Association was re-christened the Surrey Lacrosse Association (SLA). In 2012, with the folding of the South Fraser Field Lacrosse Association, we added field lacrosse to our family and nicknamed our teams "Warriors" to respect the history of that sport in the community.

The SLA services the City of Surrey north of 40 Avenue for box lacrosse (click on the map to the right to enlarge) and the entire City of Surrey for field lacrosse. Our box lacrosse teams compete in the Lower Mainland Minor Lacrosse Commission (ages 4 to 16) and in the West Coast Junior Lacrosse League (ages 17 to 21). Our field lacrosse teams (ages 7-18) compete in the Pacific Coast Field Lacrosse League. We are proud members of the British Columbia Lacrosse Association.

We acknowledge the financial assistance of the Province of British Columbia