The Game of Field Lacrosse

More and more athletes are discovering a reason to pick up a sticks in the winter.

Field lacrosse is the fastest growing game in North America at every level. The appeal? It's a neat composite of other sports, it's fast, it's easy to learn, and it's cool! As parents discover that field lacrosse is more exciting than soccer, cheaper than ice hockey and not as dangerous as football, the game is getting a closer look. 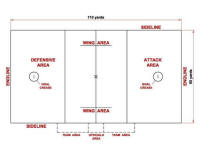 Field lacrosse is played on a rectangular playing field, 110 yards long by 60 yards wide, as shown on the diagram (click on the thumbnail to enlarge).  The goals are set forward from the end lines, so play can be switched behind the goals to draw defenders out of position.  Players are not allowed to go within the opposition's crease, marked by a large circle surrounding each goal.  The goal nets are 6 feet square in size.

There are 10 players on the field at a time for each team: a goalkeeper (or goalie), three defenders (or big-sticks as they carry longer sticks than other players), three midfielders (or middies) and three attackers (or attacks).

Goalies and defenders try to stop the opposition from scoring, the attackers supply the offence, and midfielders are expected to do a bit of both, generally bringing the ball forward in transition or running back to play defence.  Attackers are expected to have the best stick skills on the team whereas midfielders are often among the fastest players.  Defenders must be quick, but also strong enough to hold their ground.  The goalie wears surprisingly little protection considering how fast the ball can be thrown.  A lacrosse goalie needs to be agile, highly reactive and able to run, so dressing up like a box lacrosse goalie is not practical.

A game is run over four quarters of 20 minutes each. Teams swap ends after each quarter.

The game begins with a face-off at midfield. After the defenders and the attackers have moved inside the boxes at either end of the field and the midfielders are on their wings, the two center midfielders line up in the middle with their sticks horizontal on the ground.  At the whistle, the two try to flip their sticks down on top of the ball to gain control, and will usually flip the ball out to a teammate.  Once one team has possession, all other players may release and move freely on their halves of the field.

At any time, both teams must have at least four players on their defensive half of the field (normally the three long-stick defenders and the goalie) and three on the offensive half (the three attackers).

In the event that a player, such as a defender carrying the ball, intends to step over the midfield line, another is required to stay back in place of that player prior to the crossing.  Violation of this rule is called offside.  Most goalies have the desire at some point during the game to go crazy and leg it up the field with the ball.  This is allowed and they occasionally actually score a goal.

On defence, when the other team has the ball, players are permitted to body check from the front with their hands together they cannot cross-check an opponent.  Players may also use short, controlled chops and pokes of their stick to the opponents stick and hands to try and dislodge the ball.

Defenders can also use their stick (usually five feet long for more reach) to strike, or 'check' the ball carrier's stick in an attempt to release the ball.  They can also check the gloved hand while it is on the stick, to either jostle the ball or force the attacker to take that hand off the stick, reducing their ability to shoot or pass quickly.

Attackers can 'shield' their stick with a stationary arm to protect it from the defender's checks.  Play does not stop, unless the ball rolls off the field of play, a goal is scored or a penalty is called.

We acknowledge the financial assistance of the Province of British Columbia